The Blue Rose steam version finally has a release date!

Barring no issues, Blue Rose will finally release on Steam on April 23rd 2015. That is, in less than a week!

The steam release will contain an updated script, a few corrected event CGs, as well as achievements and trading cards. Those who have already bought the game directly through the White Cat website will receive keys following release for activation on Steam itself.

The game on White Cat’s own website will of course also be updated to reflect the changes and improvements in the steam version, though there will be no achievements or trading cards. 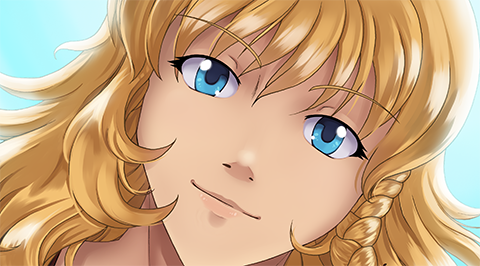 Thanks to everyone’s support, Blue Rose is now greenlit and ready to join the rising number of visual novels on Steam! Give eachother a good pat on the back, and throw some confetti around!

Of course being greenlit is not the end – it only mean that the game is now allowed to be posted in their store, but the final release is not quite ready yet. I want Blue Rose to be presented the best way it can be when it arrives on the store. Most of the things I want to do with it have been mentioned before both here and on twitter, but here is what you can expect from the Blue Rose Steam release:

I really want to provide steam keys to people who have supported the game until now by buying it, and will look into the possibility of doing so! News on this front will follow after the release.

So when will it happen?

I can’t promise any specific date as of yet, mostly because of the script improvements. It has taken some time to find a reliable editor, and it might still take a couple of months at worst. Blue Rose’s 1 year anniversary is coming up next month though, so I am hoping to be able to do something close to that time, if all goes well! 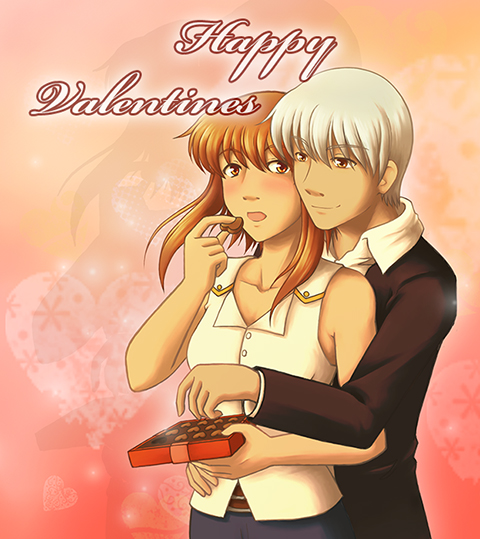 To celebrate Valentines Day, Blue Rose is 30% off until February 16th! Go get it now for your friends or dear ones, or take this chance to get it cheap if you were holding out!

For the full version of the Valentines artwork, go here.

Time to finally talk a little about what is currently going on with White Cat!

It’s been almost half a year since Blue Rose was released, and I’m very thankful for the nice reception of our Visual Novel so far! Even with private and open testing though, there will almost always be hiccups with the script after release. Some of you have sent in your corrections and comments on these, a few of them very detailed as well, and I really appreciate it. They will all be taken into consideration, and a future patch for the script will take all these things into consideration. Feel free to still send me a mail if you run into something bugging you!

Remember that the game is also still up for voting on Steam Greenlight, should you wish to show your support there.

Now for what is currently on the drawing table for White Cat. Those who have followed my twitter or tumblr, you may have already noticed me mention one of these projects in passing a couple of times. I have been reworking and rewriting Angelic Orbs from the bottom up for a little while now, our company’s next big visual novel title. Some people might know the title from our first free vn from years back, while a very few might even remember its roots as a webcomic from even longer ago.

The first vn of this title was a kind of sidestory, while this project is a complete telling of the original story from the ground up. It will also be different from Blue Rose in a few ways, one of the most noteable ones the fact that this is not a first-person story. The reader will not step directly in the shoes of a protagonist and aiming for romance routes, but will instead follow a small group of protagonists and influence their journey over the course of the story, sometimes even choosing what POV to follow in the coming events.

A few other features are in mind for this title, that I won’t speak of yet however. The script is in the middle of being written, as well as general character and world designs being made. Hopefully I can show you something more of this soon, though the game itself won’t be done in a while.

At the same time as this, I am also working on another project of a very different kind than Blue Rose and Angelic Orbs. It will be cute and deadly. But that is all I’m going to say about it so far.

And that is mostly what is going on at the moment! After our first big release we are hoping for 2014 to be another good and productive year, coming closer to bringing you great storytelling and entertainment.

And in the future if the support for it is there, I might return to this lonely folder on my desktop named “Blue Rose 2″… 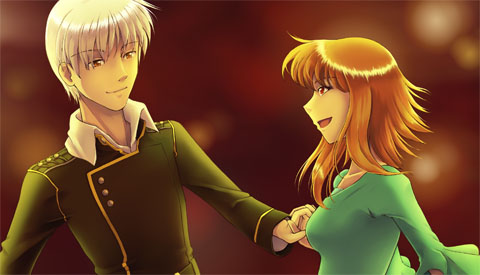 VN’s Now! announced their winners for the 2013 Best Of’s, and Blue Rose got the spot for Best Romance!

A big thank you to the site that has also given the game and White Cat a nice bit of attention with their review and interviews!

And of course a congratulations to the other winners on the site, especially Muesli and Dischan for winning “English Visual Novel of the Year” and “Studio/EVN Circle of the Year”!

Here’s to hoping we can all keep it up in the new year!

The visual novel Blue Rose is now up for voting on Steam Greenlight! If you’d like to see some Otome fantasy action on Steam, go vote now! If still in doubt, you can always try out the demo.

If you already bought the game, feel free to vote anyway and maybe get the chance to get a steam key for your copy.

Since releasing Blue Rose, I have received many requests for guides and help with obtaining Aran’s ending.

While this is not an actual walkthrough, here are some hints for those who are still stumped.

END_OF_DOCUMENT_TOKEN_TO_BE_REPLACED

And finally the last introduction – the elusive Aran:

Aran… what can really be said about him?

Aran is always there in the distance, watching. He’s quite an expressionless character, unless you meet him under the right… circumstances.

In the novel his route will not be available until you clear at least one other path first.

(Now that Blue Rose has been released, let’s get the last two characters introduced!)

Tobias is a young hunter who lives alone in the forest. He finds and saves Lena, but in the end they don’t get along very well. 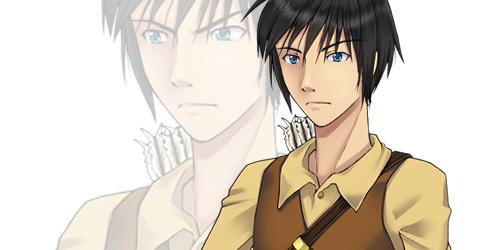 Tobias prefers to be alone and generally dislikes soldiers and everything else connected to the war going on in the world outside. As a result he finds it difficult to accept the presence of someone like Lena.

He is also the only chase-able male without some sort of amazing combat skillz.

A minor bug prevented a certain CG from being unlocked in the CG gallery. To fix it, simply download this patch and unzip it in the Blue Rose “game” folder:

If it asks to overwrite old files, choose ‘yes’.

Old saves should still function without problems after applying the patch.

Any new orders and downloads of the game are already updated and have this issue fixed, and as such will not need this patch.